Notable sales detailed in our March 20, 2020 issue include a Papuan Gulf shoulder shield at Clars, which went for more than three times its high estimate, selling for $30,750. Another lot rising far above its estimates was seen at Material Culture in the form of a Fang Byeri female reliquary guardian that realized $16,640 against an estimate of $800-$1,200. Chinese art was prominent at two other auctions. Two Chinese ring-neck vases came to the block with a $150/300 estimate at Litchfield County Auctions, and after 88 bids, sold for $25,350. At DuMouchelle’s, a Chinese cloisonné and white jade planter realized $13,970 from an online bidder against an estimate of $100/300. These and more notable sales across the United States follow.

LITCHFIELD, CONN. – An online bidder from Canada won the top lot at Litchfield County Auction’s winter antiques sale on day one of the two-day auction, February 22 and 23. The lot included two Chinese ring-neck vases that came to the block with a $150/300 estimate; one, a large vase with a globular body and an apocryphal Qianlong mark on the foot (drilled for a lamp), glazed in a flambe-style glaze, the other, a smaller ring-neck vase of a celadon crackle glaze. After 88 bids for the vases, the final price was $25,350, which came as a surprise because prior to the auction, there was little interest shown in the vases. For information, 860-567-4661 or www.litchfieldcountyauctions.com. 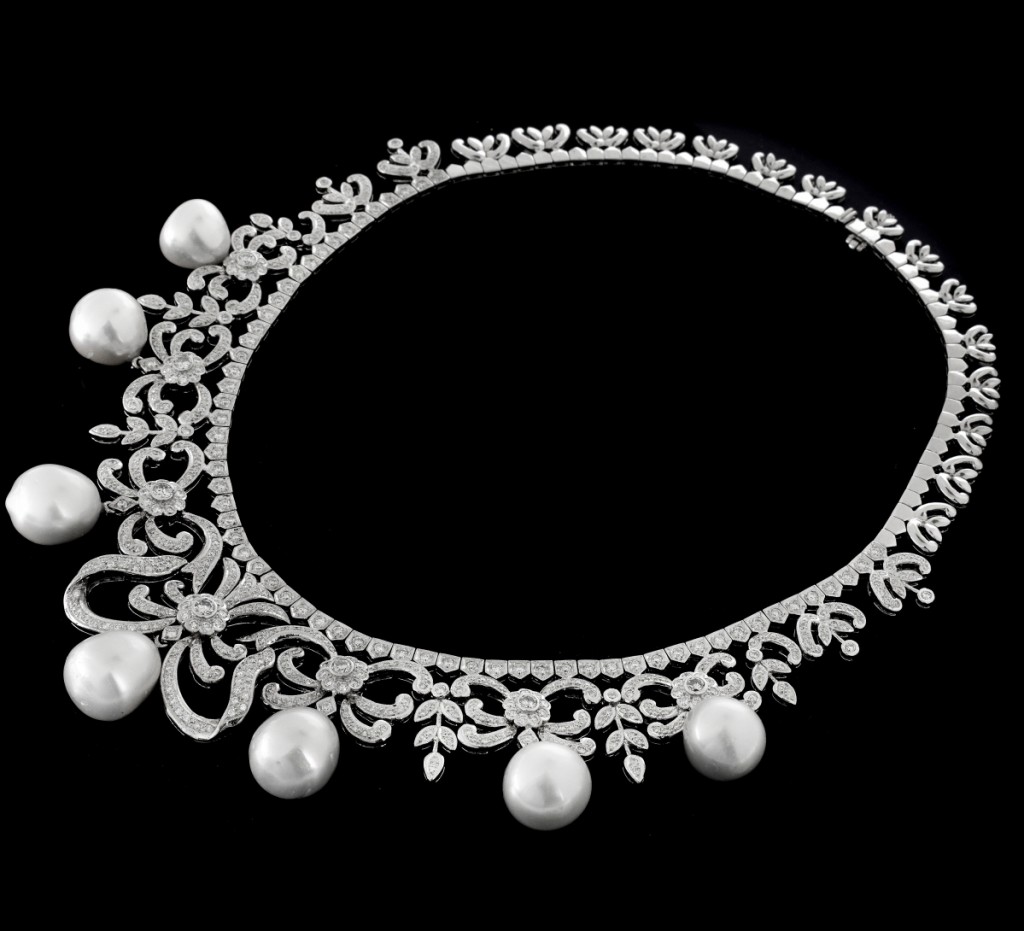 PHILADELPHIA – A Fang Byeri female reliquary guardian topped Material Culture’s February 23 sale, achieving $16,640 against an estimate of $800-$1,200. The 18½-inch-tall carved wood figure, which was embellished with beads and a feather, had been in the collection of Allan Stone and was previously offered at Rago Auctions in 2018. A European collector bidding online won the lot. Commenting after the sale, Material Culture’s Gary Blub said, “Whenever possible, we use low, conservative estimates to attract bidder interest. [This was a] rare, highly desirable form with good age.” For information, 215-849-8030 or www.materialculture.com.

EAST DENNIS, MASS. – A pair of unsigned Chinese School export paintings depicting ladies in a garden sold for $3,750 at Eldred’s February 20 evening sale, outpacing the lot’s $1,5/2,500 auction estimate. The 18-by-23½-inch oils on canvas were one of 14 lots of export in the sale, almost all of which sold within or above estimates. For information, 508-385-3116 or www.eldreds.com. 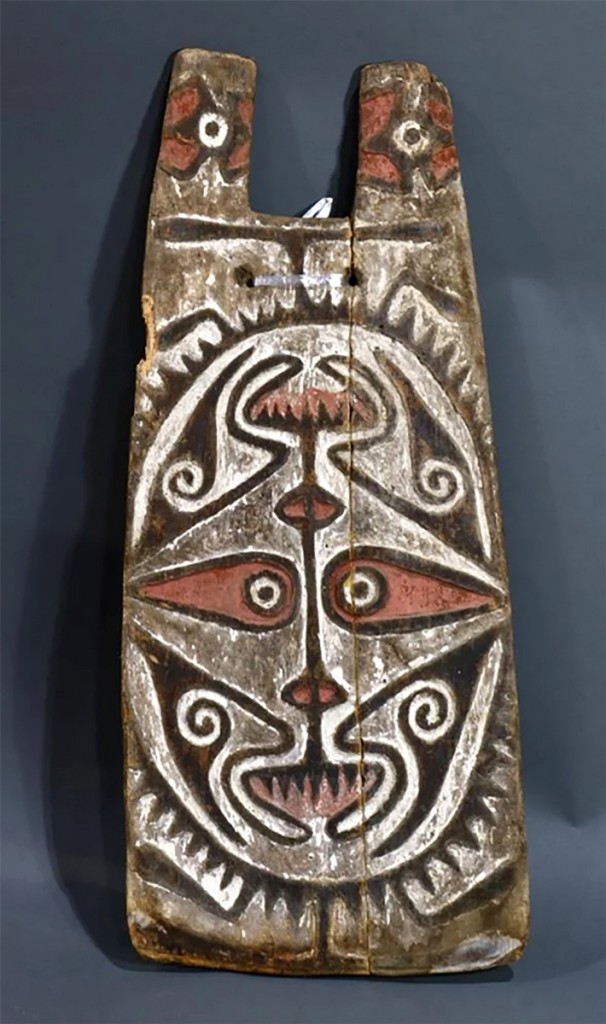 OAKLAND, CALIF. – Clars Auction Gallery’s February 22-23 auction presented to the market works by renowned artists, designers and historic collections spanning the categories of fine art, decorative arts and furnishings, jewelry and Asian antiques and art. Also presented was the second installment of the collection of oceanic and tribal art items from the Richard I.M. Kelton collection. One of the many highlights included a Papuan Gulf, South Coast Papua New Guinea, shoulder shield, which went for more than three times high estimate, selling for $30,750. For information, 510-428-0100 or www.clars.com.

Bidding Sprouts At DuMouchelle’s For Jade And Cloisonné Planter

DETROIT, MICH. – The estate of Chicago collector Gerald Torrence was one of the featured collections in the February 14-16 sales at DuMouchelle Art Galleries. One of the top lots from his estate was a Chinese cloisonné and white jade planter that realized $13,970 from an online bidder against an estimate of $100/300. The Torrence estate included many Asian works, including a Chinese signed watercolor fan featuring a rodent and vegetable motif with a poem on the reverse that finished at $12,700 ($25/75). For information, 313-963-6255 or www.dumoart.com. 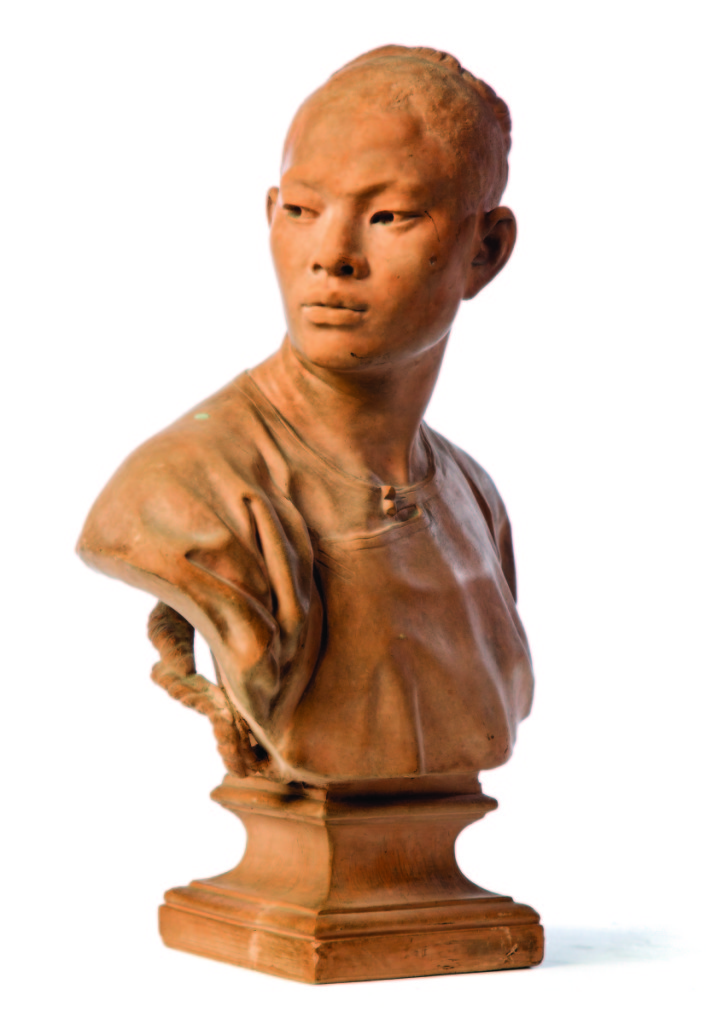 COLUMBUS, OHIO – A terracotta bust of a Chinese man by French sculptor Jean-Baptiste Carpeaux (1827-1875) was among the notable lots at Garth’s February 22 sale of continental, Asian and Twentieth Century decorative and fine arts. Selling at $5,400, the 13½-inch-high bust, titled “Le Chinois No. 2,” was signed “JBt. Carpeaux” and stamped “Propriete Carpeaux,” “Atelier-Depot, 71 rue Boileau a Auteuil, Paris,” numbered 1765. Carpeaux was a sculptor and painter known for his naturalistic style during the Second Empire under Napoleon III. For information, 740-362-4771 or www.garths.com. 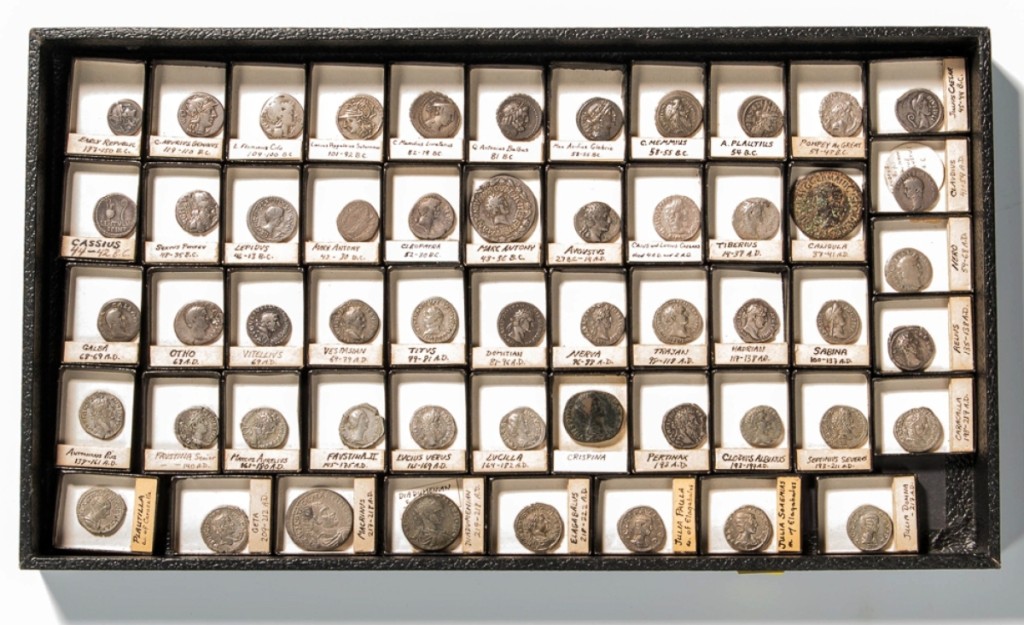 MARLBOROUGH, MASS. – The February Skinner coins and currency auction offered choice older collections and experienced spirited bidding with many lots far surpassing their high estimates. Strong results were achieved for ancient and world coins, with American rarities, peppered throughout the auction. Some of the more notable groups of ancient Greek and Roman coins included denarii of Cleopatra, Julius Caesar, Cassius and Marc Antony, and sestertii of Nero, Trajan, Caligula and Nerva. These two lots performed especially strong, at $10,000 and $11,250, respectively. For information, 617-350-5400 or www.skinnerinc.com. 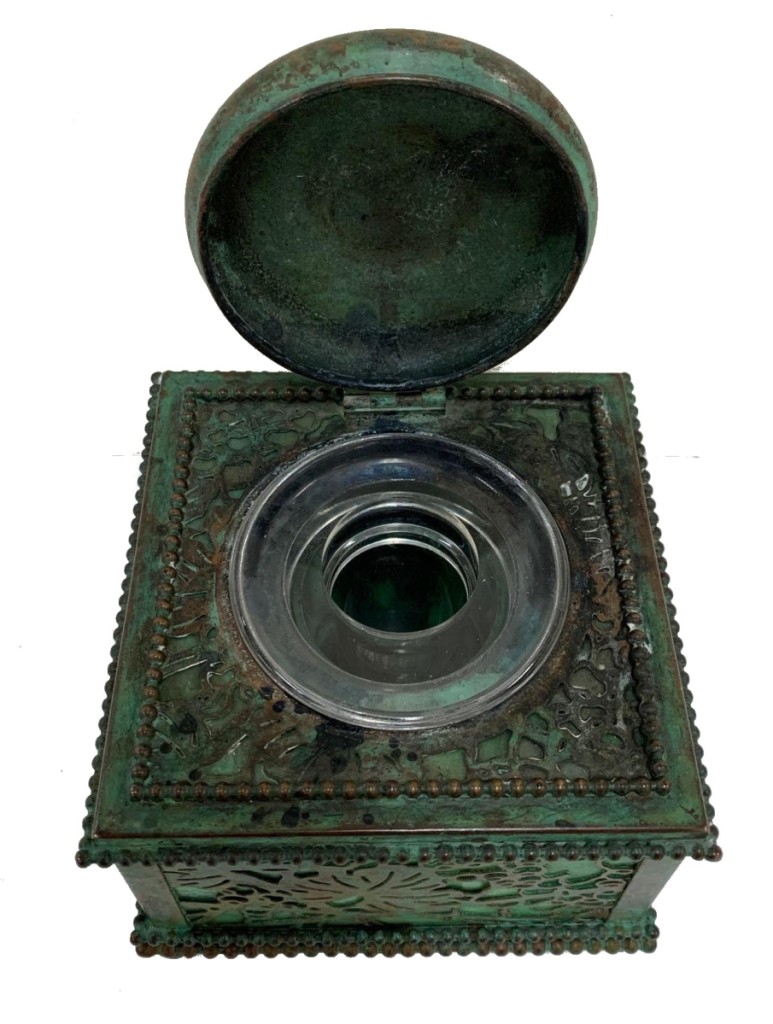 HATFIELD, PENN. – Alderfer Auction conducted a gallery sale on February 20 and an online jewelry auction that closed February 19. A highlight of the gallery auction was a Tiffany green slag glass inkwell (shown) with decorative fretwork and glass insert. Marked “Tiffany Studios New York” and measuring 3½ by 4 inches square, the item signed off at $360. Notable among jewelry was a decorative necklace with amber carving set in sterling silver with turquiose and coral frogs, fish, rabbit and other creatures in a silver frame. Its price tag was $268. For information, 215-393-3000 or www.alderferauction.com.