Hermitage Amsterdam Extends Its Russian Empire Jewelry Exhibit Till May 3

The Hermitage Amsterdam museum is closed until at least March 31 in order to aid with the containment of the novel Coronavirus. However, when the museum does reopen there will be another opportunity to view the jewels that sparkled during the height of the Russian empire.

The main exhibit space for the Jewels! exhibition in the Hermitage Amsterdam museum

The exhibition titled, “Jewels!” has been extended until May 3. It focuses on the extensive and important jewelry collection owned by the State Hermitage Museum in Russia and loaned for this exhibit to its Amsterdam branch. Along with the jewels are portraits and the decorative gowns and ensembles once worn by those among highest echelons of the Russian court in St. Petersburg. It represents more than two centuries in fashion and jewels. From 18th century during the reigns of empresses Anna, Elizabeth and Catherine the Great until the early 20th century with outfits and baubles from the grand dukes and duchesses, tsarinas and nobles of the 19th and early 20th century. 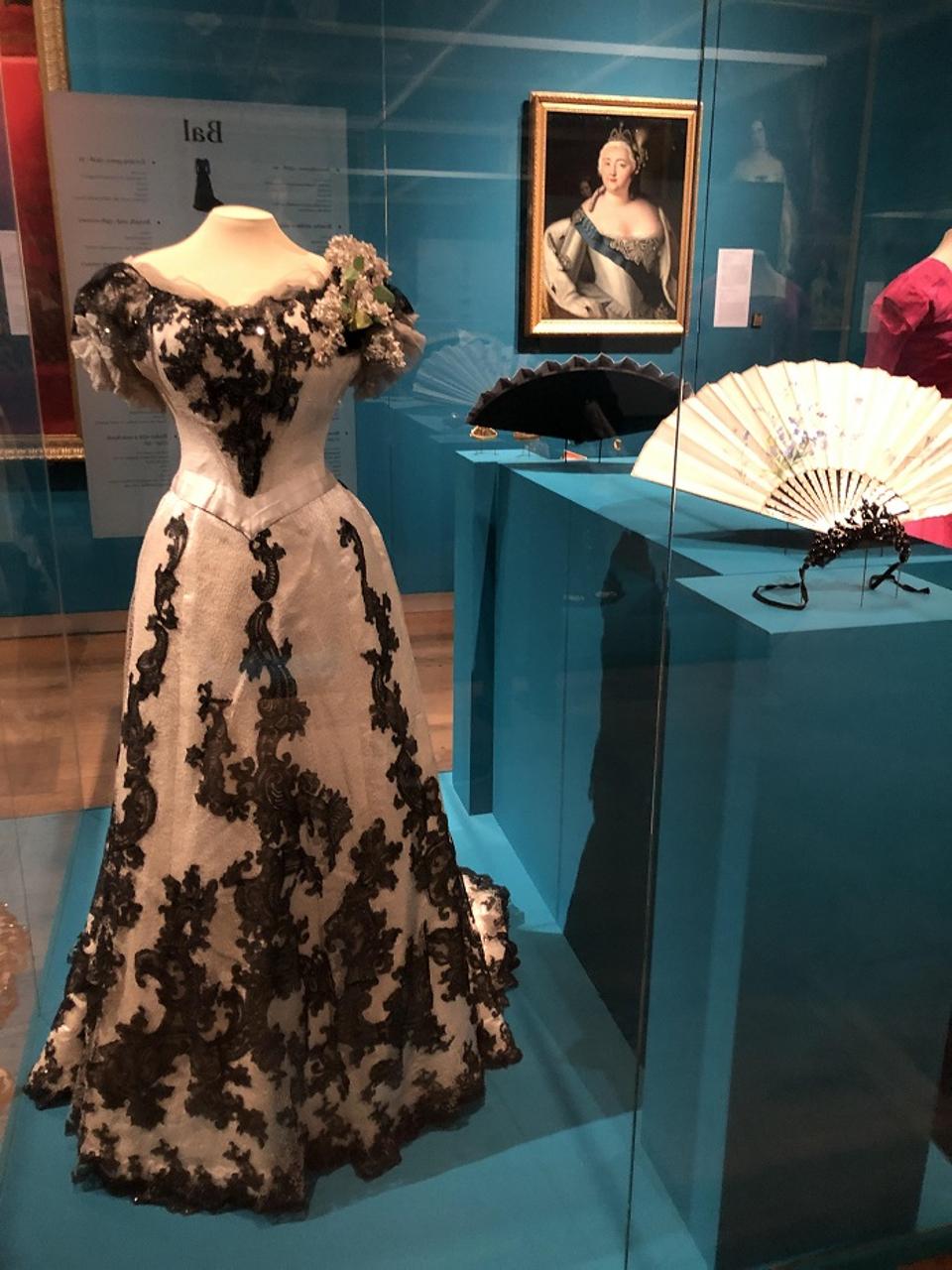 According to the museum, the guests at balls and parties in St. Petersburg matched their costumes with carefully selected bijoux that demonstrated their identity, taste, breeding and wealth. Jewelry might also be designed to provoke or convey secret messages. Pieces were ordered from leading houses like Cartier, Tiffany and, of course, the House of Fabergé, the special supplier to the Imperial Crown in the 19th and early 20th centuries. 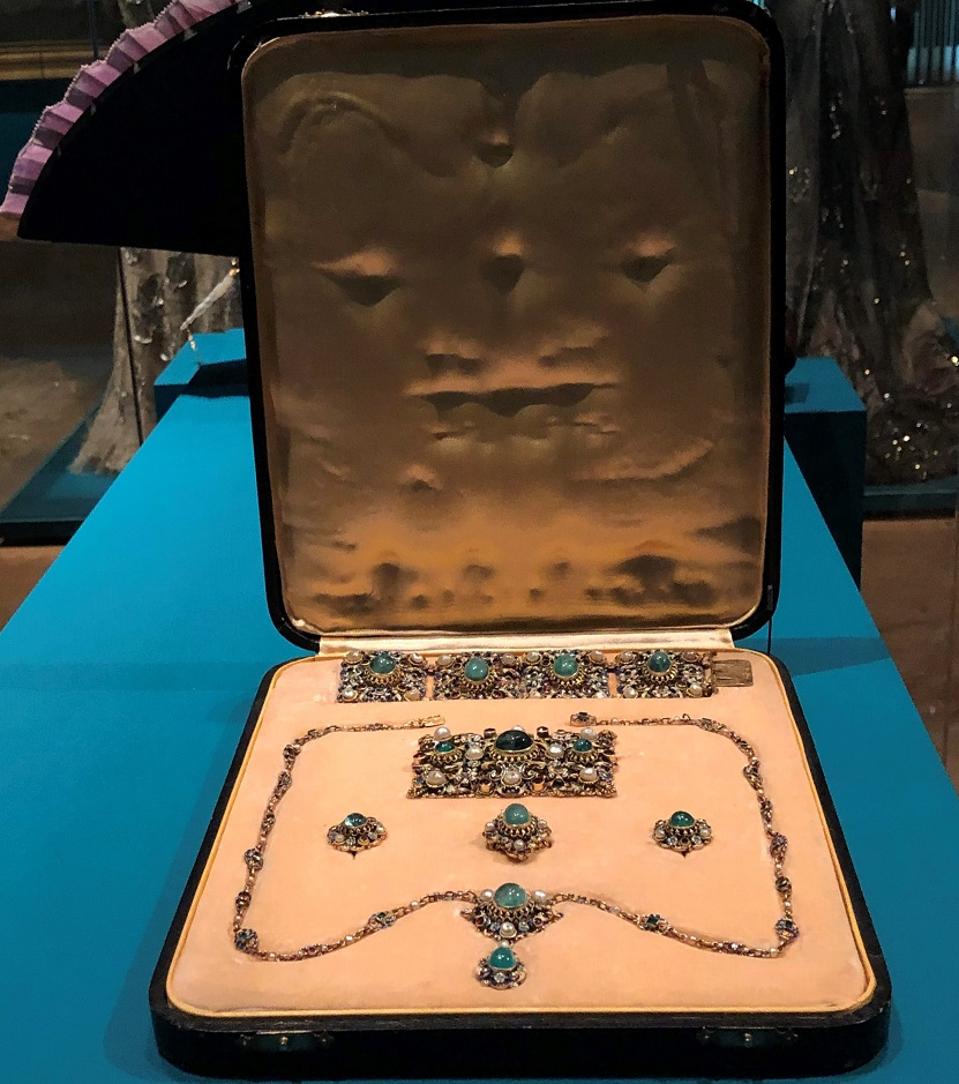 A Parure consisting of a necklace, brooch, ear pendants, bracelet and ring made of emeralds, pearls, … [+] enamel and other materials

Many of the jewels owned by emperors and empresses were lost, stolen or destroyed by the Bolsheviks following the overthrow of the Tsarist system in the February Revolution in 1917. However, the jewels that survive in the multiple rooms of the exhibition are quite impressive even if many of the descriptions of the pieces are lacking in detail. For example, one description of a gold bracelet made no mention of a large natural pearl that is its centerpiece. 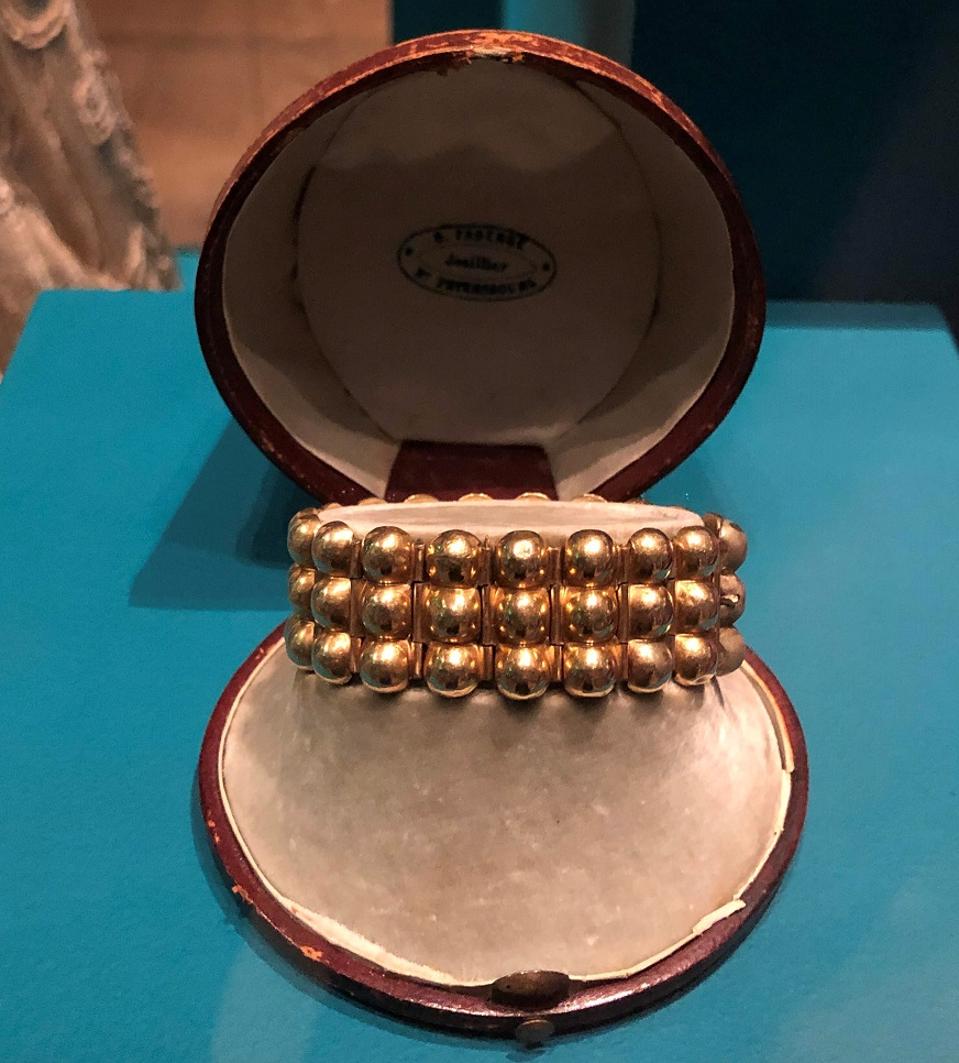 A beaded bracelet made of precious material

The exhibit begins in a room with “emerald green” painted walls and a large mirror in the back of room shaped like a folding hand fan that was popular at the time. In large cases are the women’s gowns and men’s ensembles with jewels that they would likely have worn with the outfits. Not all of it was precious, rock crystal and enamel was mixed with gold and silver colored gems and natural pearls. 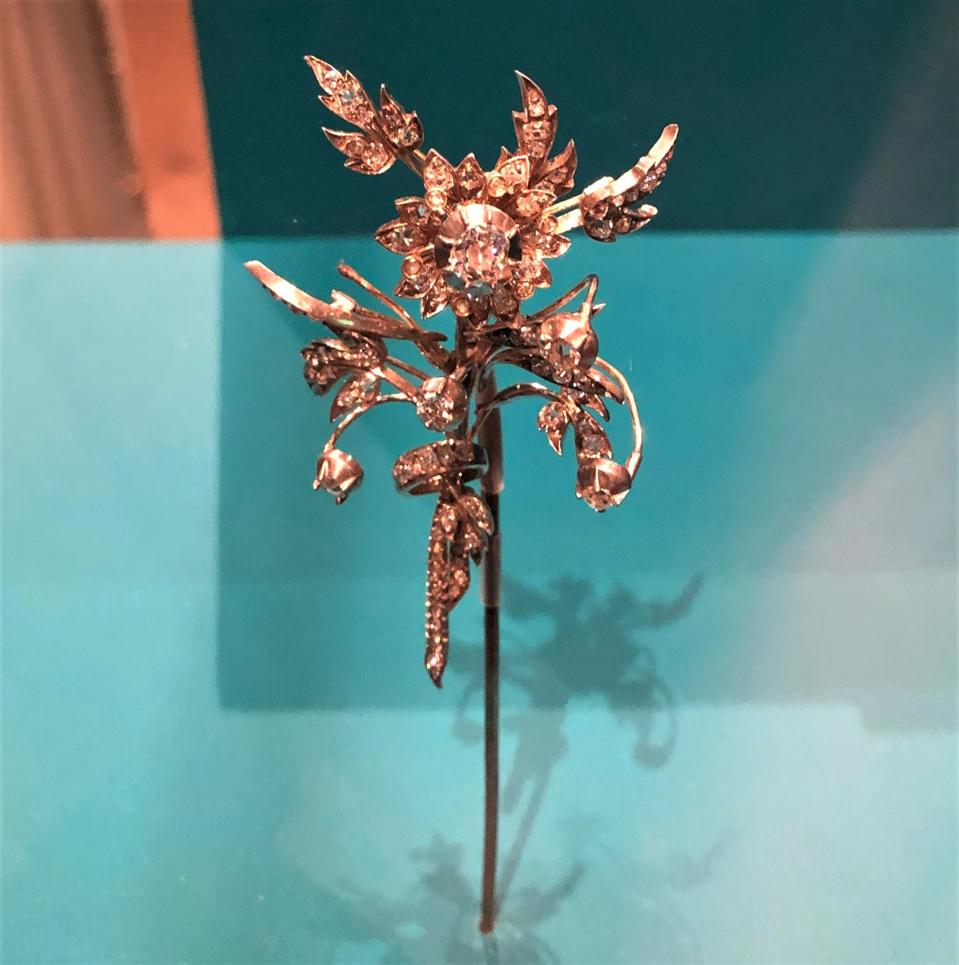 A flower brooch in a complex blooming design is made of gold, silver, “brilliants” and rose cut … [+] diamonds

One of the most interesting pieces in this area was a Parure featuring a necklace, brooch, ear pendants, bracelet and ring made of emeralds, pearls, enamel and other materials. In another case was a beaded bracelet that looked like it was fully made of 18k yellow gold but in its description is simply says, “precious metal.” A flowered brooch in a complex blooming design is made of gold, silver, “brilliants” and rose cut diamonds. 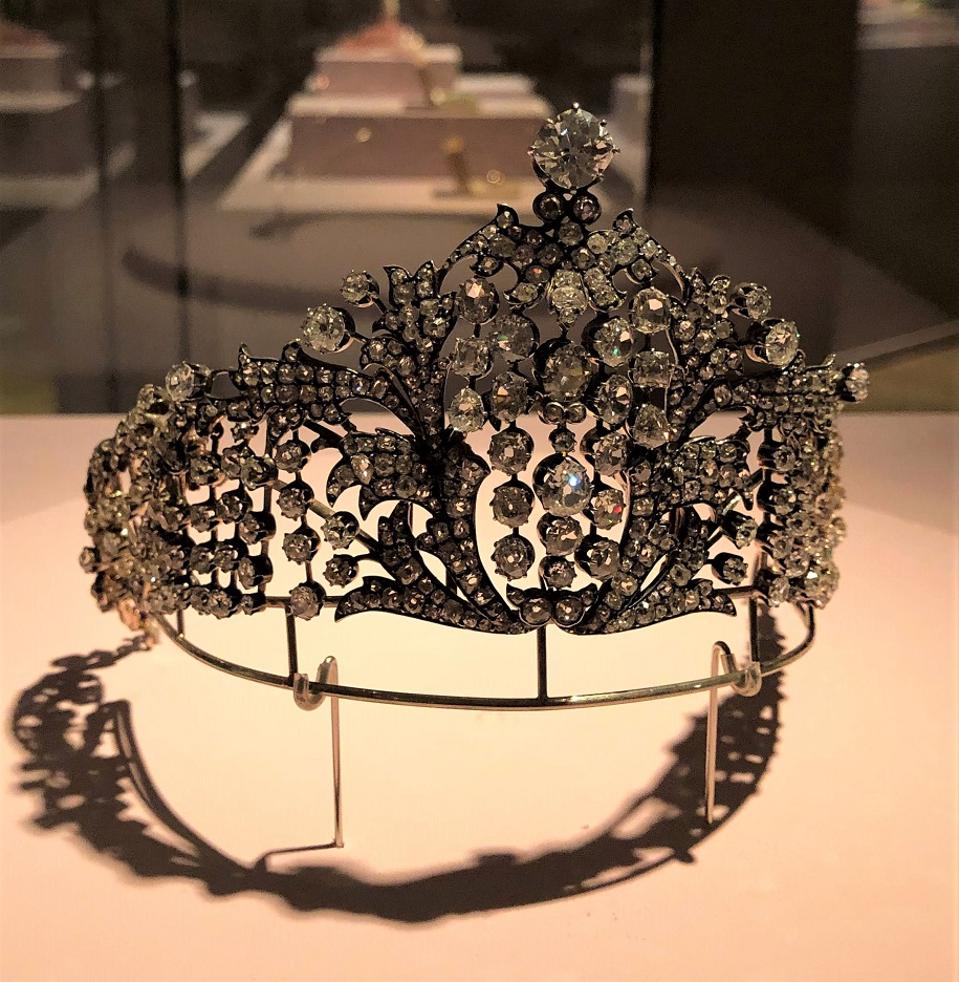 a diadem made by Fabergé in a Kokoshnik style was worn by Empress Maria Fyodorovna, mother of the … [+] last tsar, Nicholas II. It’s made of gold, silver, diamonds and “brilliants.”

For those who are primarily interested in the jewels the exhibit is at its most extensive past the main hall and inside a group of adjoining rooms. In display cases on floors and on walls throughout these rooms there are jewels and pocket watches in various materials and styles. There’s little information regarding the relationship of the jewels to their wealthy and powerful owners but there are certainly examples of pieces that would appeal to any taste. Bejeweled, gold pocket watches were as much of a fashion statement for women as gold pocket watches were for men and there are fine examples of both. 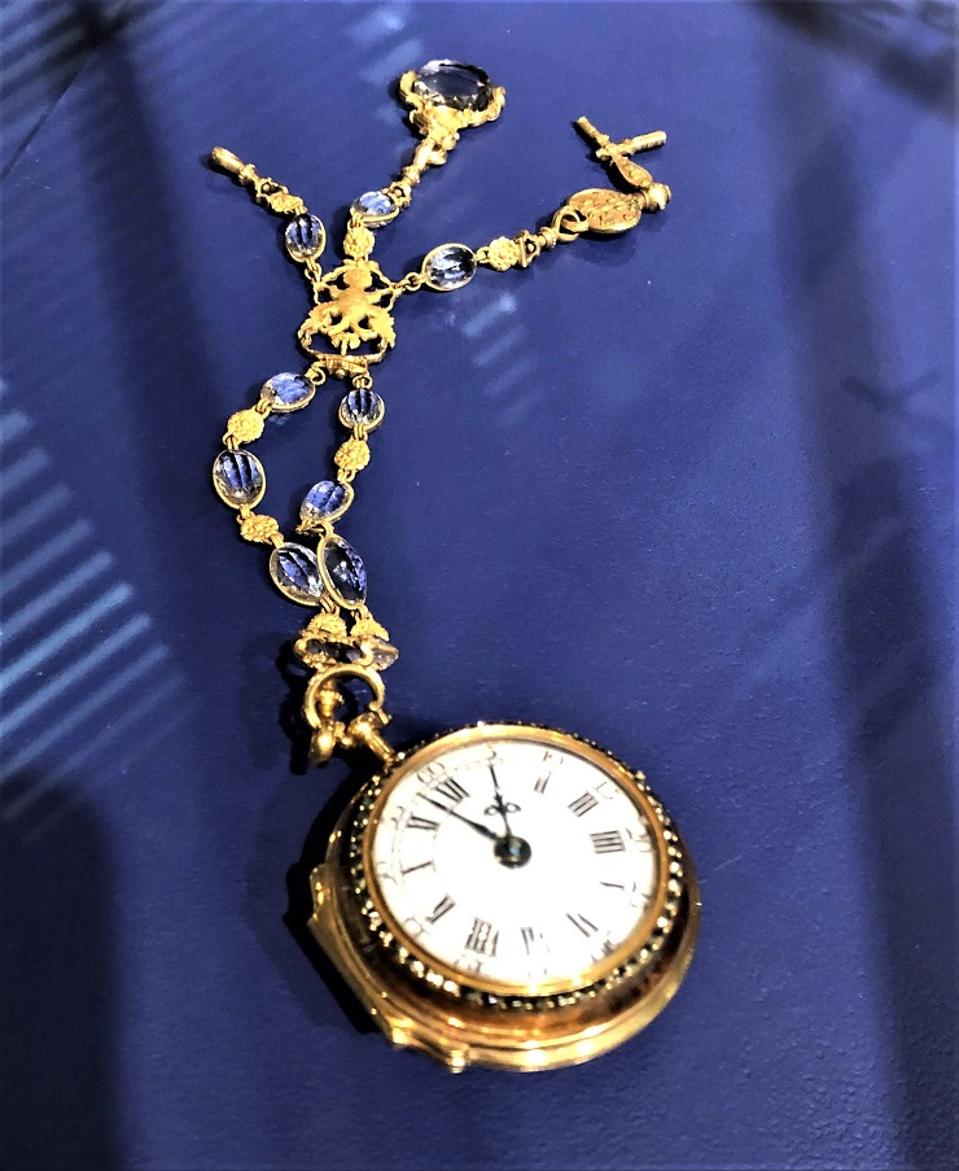 A pocket watch for women attached to a bejeweled chain

There are several pieces of turquoise jewels, a symbol of fidelity, which is often used for wedding jewelry. One cameo ring has a portrait of man’s head. One piece, which appears to be a two-finger ring, is carved into a blooming bouquet of flowers dotted with pink and green gems. 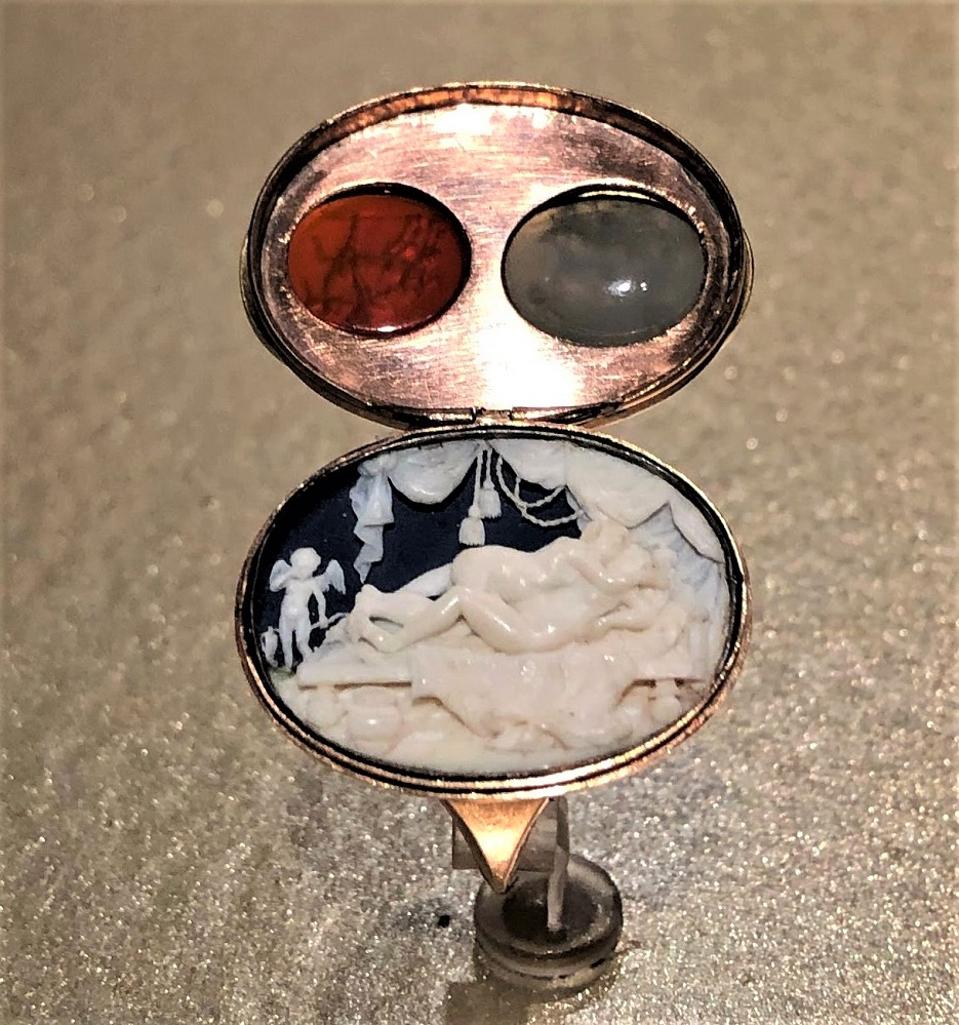 A ring opens to reveal a miniature bone carving of two women making love. Cupid, the God of Love, is … [+] in the background covering his eyes with his hands

There’s even a section of erotica jewels and pocket watches, apparently for men and women. One ring opens to reveal a miniature bone carving of two women making love. Cupid, the God of Love, is in the background covering his eyes with his hands, as if in disapproval of this. Beneath the cover of a gold pocket watch is a gold carving of a man and woman making love on a white background. 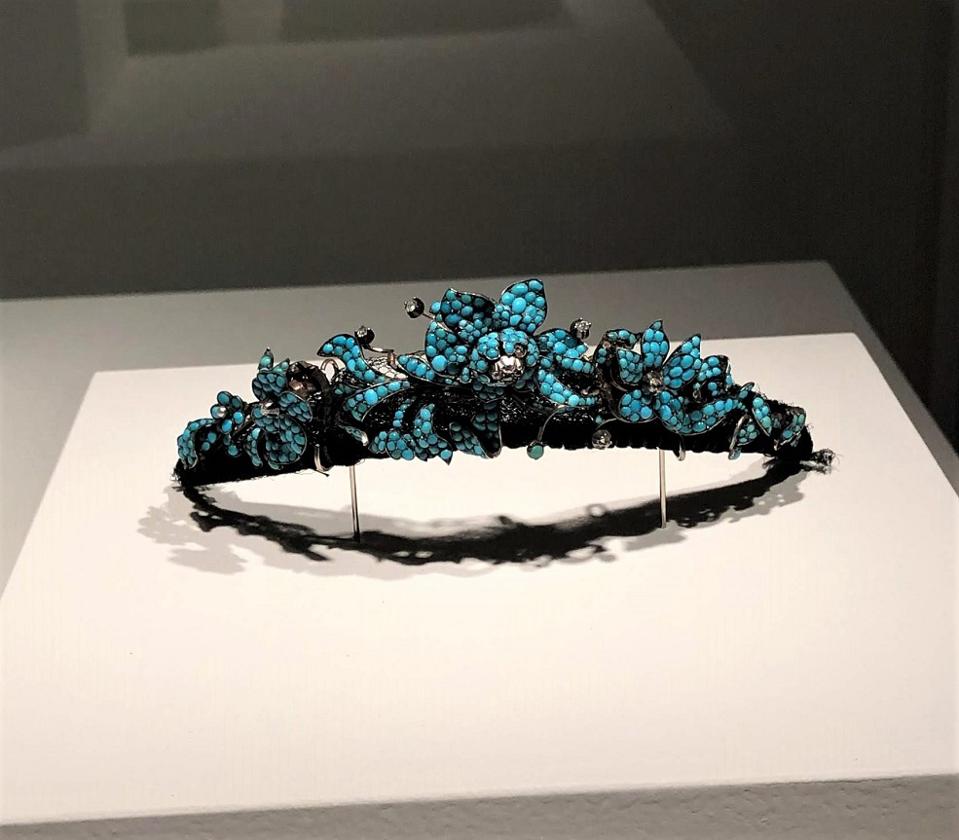 A bracelet made of turquoise, a symbol of fidelity. Turquoise is often used for wedding jewelry

One of the stars of the exhibit is a diadem made by Fabergé. There’s also a lot known about this particular piece. It is created in a Kokoshnik style, a traditional Russian style for a head ornament that is typically broad and sits high on the forehead. It was worn by Empress Maria Fyodorovna, mother of the last tsar, Nicholas II. It’s made of gold, silver, diamonds and “brilliants.” 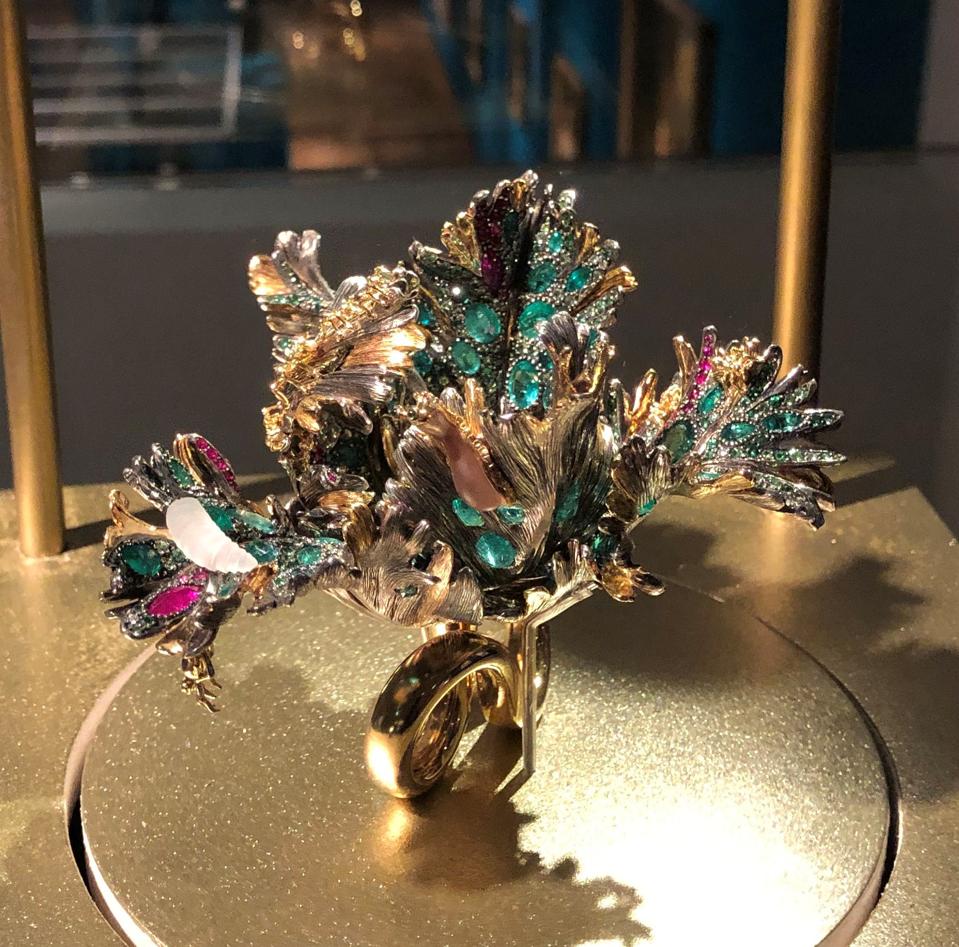 A jewel is carved into a blooming bouquet of flowers dotted with pink and green gems.

The exhibit could use more scholarly research to enhance the descriptions of the pieces and their historical importance. However, the sheer number and variety of jewels and watches to explore is like a treasure hunt. The costume exhibits and portraits provide a good idea of how the jewels were worn and does a credible job of describing the major players during the height and downfall of the Russian Empire. With hope that the coronavirus ends its havoc by the end of the month, the April 1 scheduled reopening of the museum will allow more than a month to view the exhibit.

Proper Jewelry With an Evening Dress : Formal Wear for Women

END_OF_DOCUMENT_TOKEN_TO_BE_REPLACED

How to Clean Gold Jewelry With Amonia & Gluted in Gemstone

END_OF_DOCUMENT_TOKEN_TO_BE_REPLACED

DIY Jewelry Repair: How To Convert Pierced Earrings To Clip-Ons

END_OF_DOCUMENT_TOKEN_TO_BE_REPLACED

Demonstration of different Leverback Earrings for your Jewelry Designs

END_OF_DOCUMENT_TOKEN_TO_BE_REPLACED

Quick Tips for Your Jewelry Photography