There’s nothing more ladylike than a string of pearls — but it turns out, they can be pretty manly too.

For centuries, pearl necklaces have been considered the classiest accessory a woman could add to her outfit, and they’ve completed countless iconic looks worn by the likes of Jackie O, Audrey Hepburn, Grace Kelly, and Coco Chanel.

But at some point in the last couple of years, famous men have decided that they’d like in on the fashionable fun, with everyone from Harry Styles to A$AP Rocky stringing pearls around their necks.

Move over, ladies! Fashion-forward male celebrities are wearing pearls for red carpets and performances (pictured: A$AP Rocky at a Dior show on November 30, 2018) 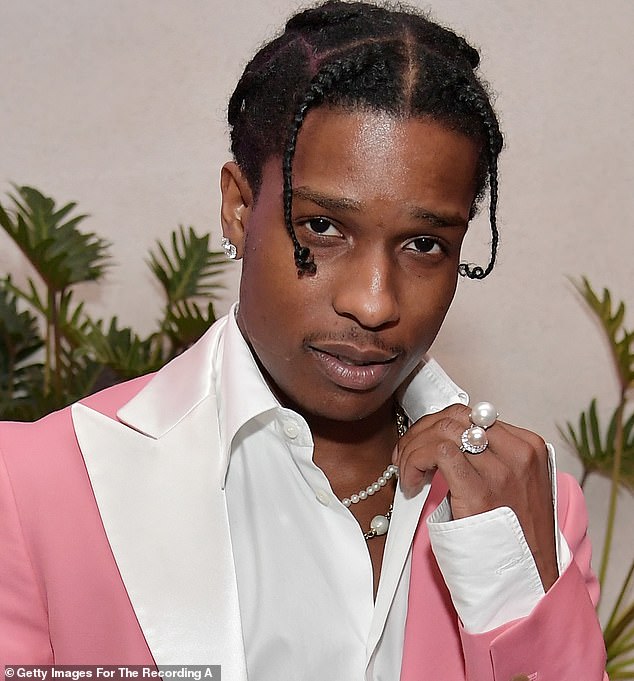 A twist on bling: Rapper A$AP Rocky in particular has worn pearls on several occasions (pictured at a pre-Grammy party in February 2019) 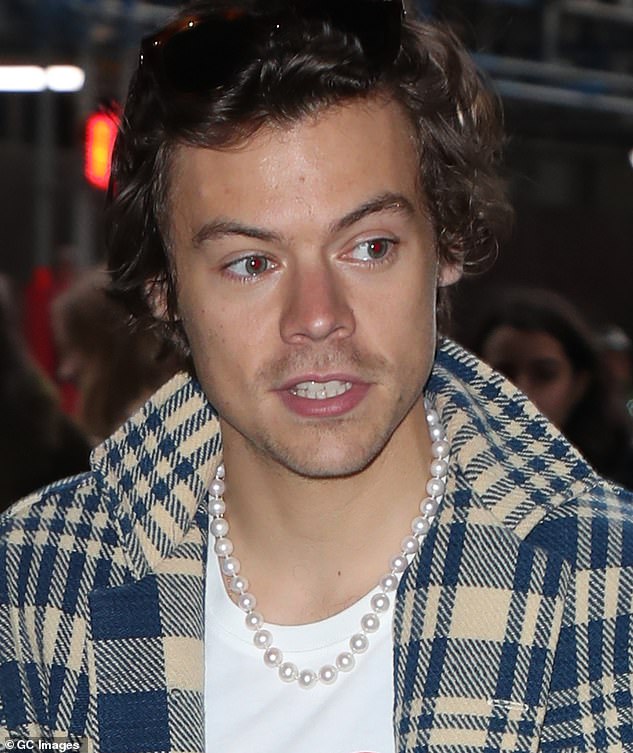 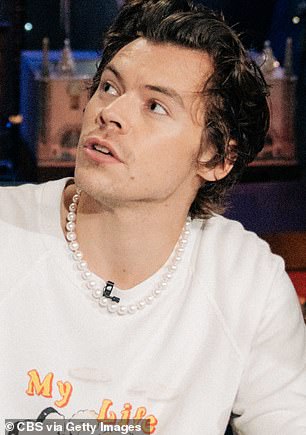 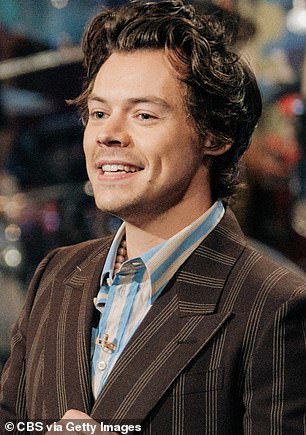 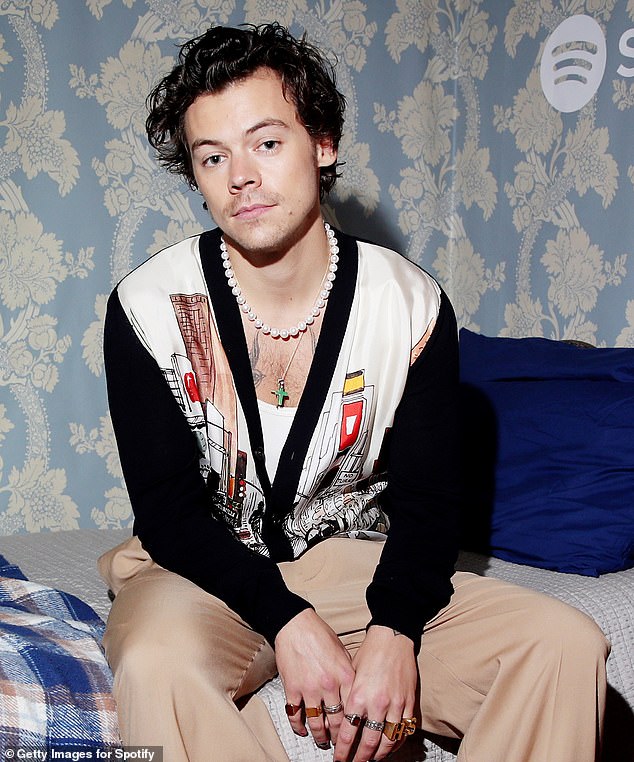 ‘If I see a nice shirt and get told, “But it’s for ladies.” I think: ‘Okaaaay? Doesn’t make me want to wear it less though,’ Harry has said 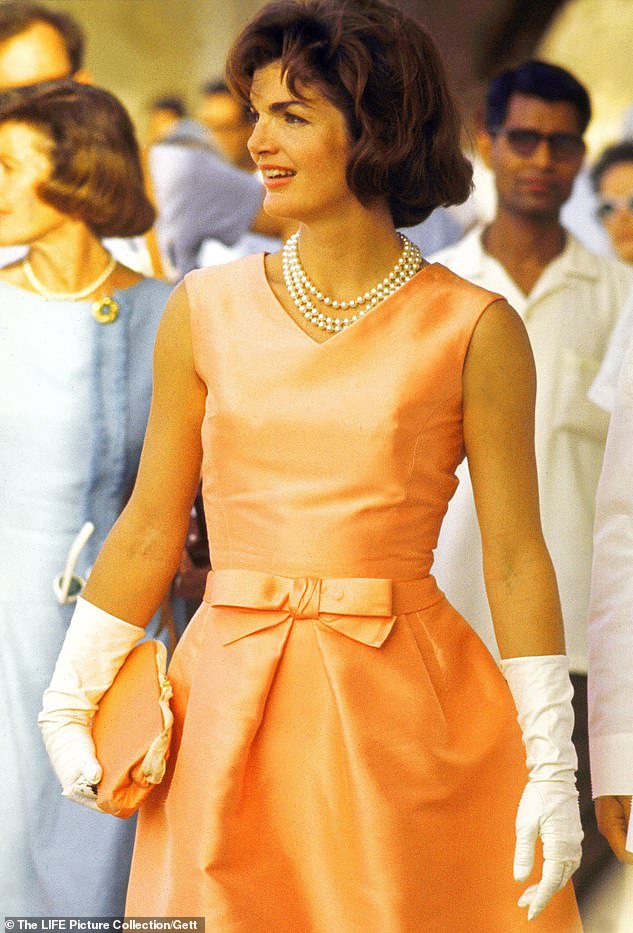 A different take: In the past, pearl necklaces have been a staple of an upscale womenswear look, as seen on former first lady Jackie Kennedy in the ’60s

Pharrell Williams may have kicked off the trend back in December 2016, when he surprised fans and fashionistas by walking the runway for Chanel in Paris.

The musician stunned in a gender-bending Chanel ensemble, donning a blue tweed jacket over a T-shirt and black slacks.

He accessorized with a pearl brooch and a glamorous layered pearl necklace that hung in several strands down his torso.

At the time, the choice was a truly novel one, and Twitter users and fashion sites alike buzzed about his boundary-pushing, outside-the-box dressing.

Whether Pharrell and Chanel gave other male stars the idea to follow suit, or the singer just happened to have impeccable timing, is unclear — but within the next few years, dozens of other male stars have rocked pearl necklaces.

By the end of last year, Vogue was reporting the trend, highlighting the way the jewelry has popped up on runways for Gucci, Palomo Spain, Alexander McQueen, Dior, and Ryan Roche. 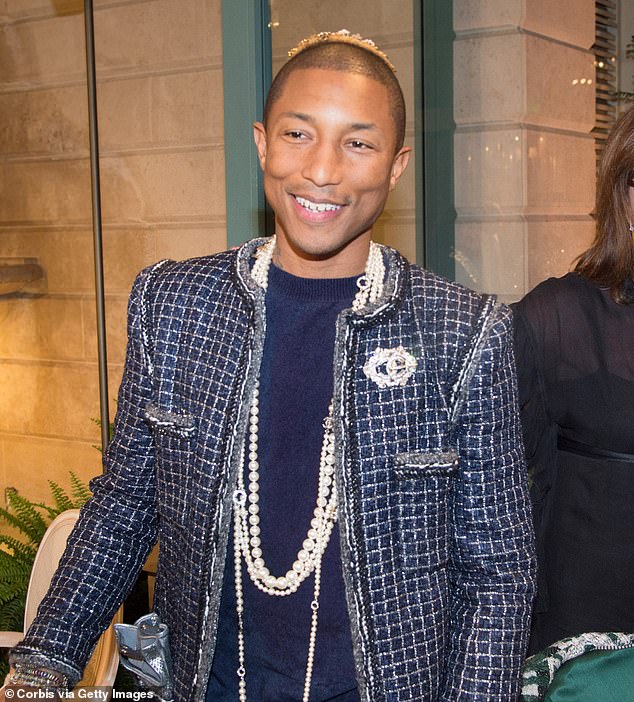 Trendsetter: But Pharrell Williams may have been the first: He wore layered pearls and walked in a Chanel runway show in December 2016 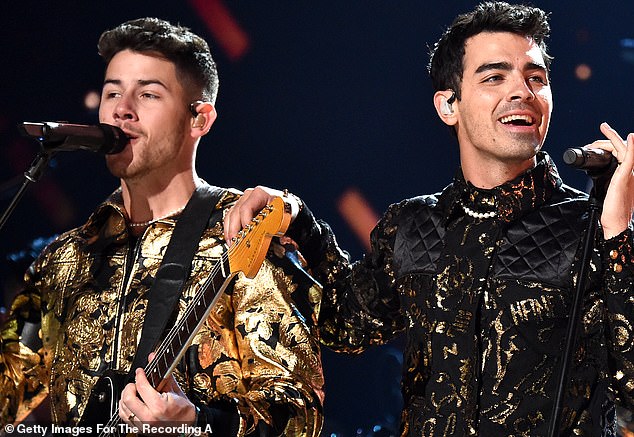 The pearl bros: Joe and Nick Jonas both wore peals with their shiny brocade outfits at the Grammy Awards this January 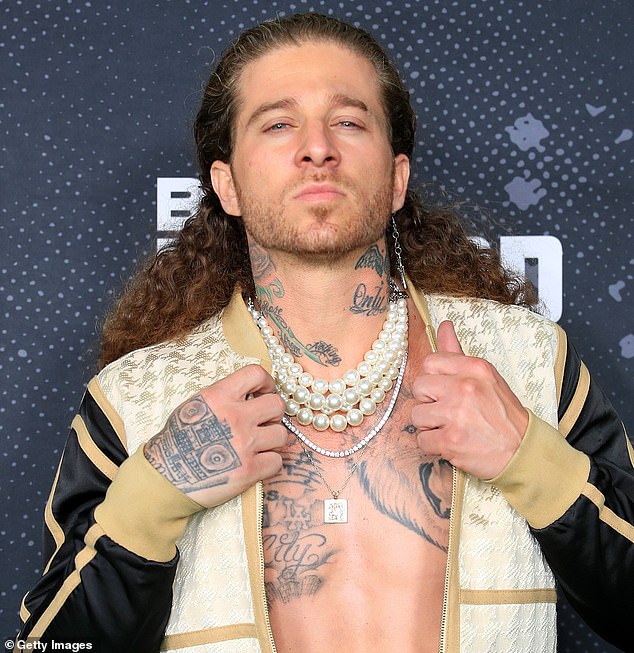 No shirt, just pearls! Micky Munday wore big layered pearls — and no shirt — to the BET Hip Hop Awards this past December 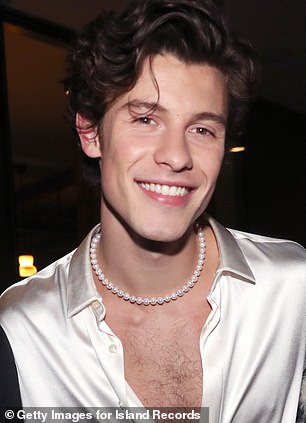 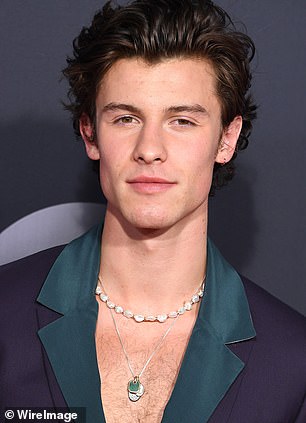 A little jewelry: Singer Shawn Mendes has also worn them on multiple occasions (pictured left in January and right in November)

Actors, singers, and rappers have all taken the look for a spin, proving that pearl necklaces actually go with quite a lot of different menswear looks, from sleek suits to cool athleisure to casual tees.

Some have only done it once or twice, like Joe and Nick Jonas wearing simple necklaces with their outfits for a Grammy’s performance in January.

Their take on the trend went the flashier route, with the boybanders pairing their jewelry with shiny brocade ensembles.

Usher also wore pearls to a Grammy after-party, while Empire star Jeremy L. Carver and designer Ugo Mozie have tested them out, too.

Some men rocking pearl necklaces are who you might expect — stars who are known for their gender-bending, boundary-pushing fashion sense, like Pose star Billy Porter or actor Ezra Miller. 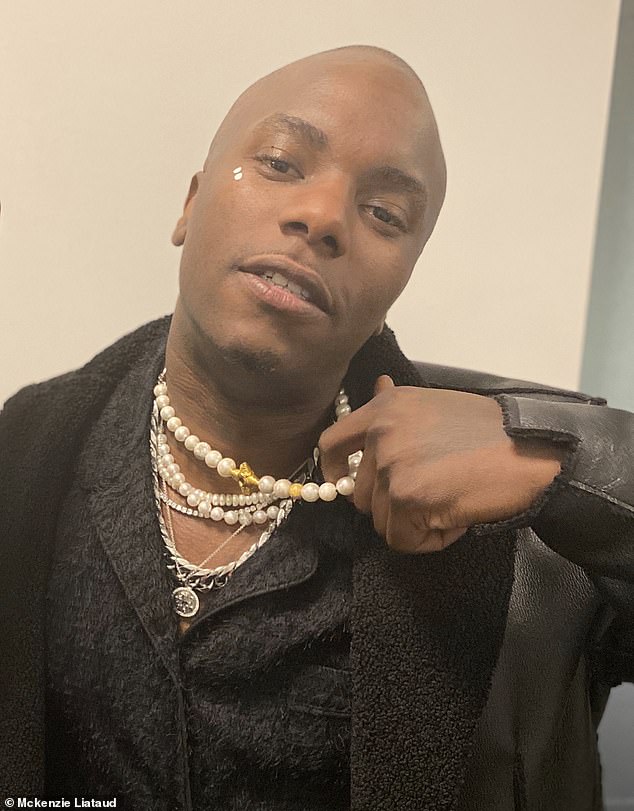 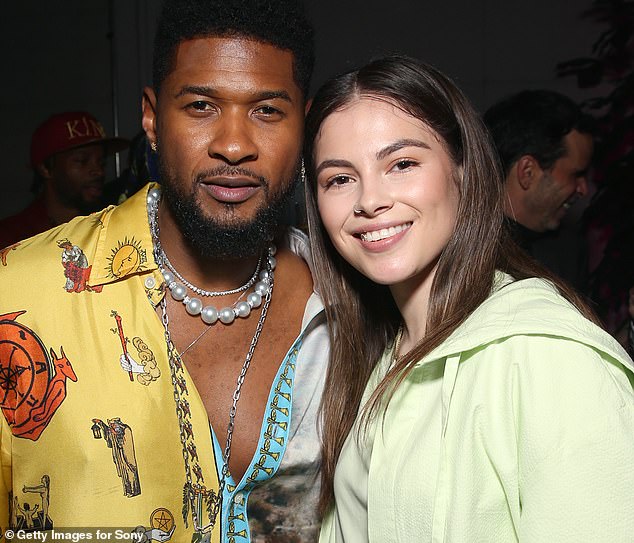 Lookin’ good: Meanwhile, Usher added pearls to his printed shirt at a Grammy party this January 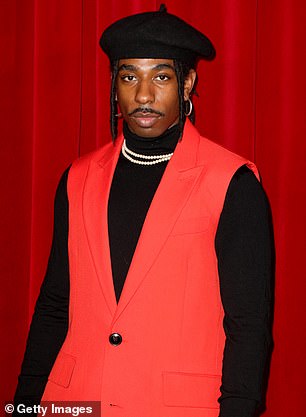 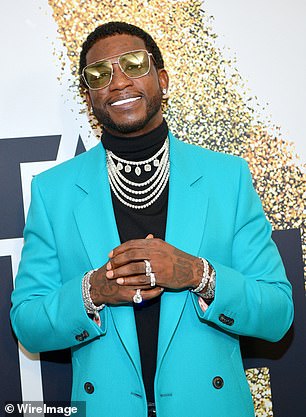 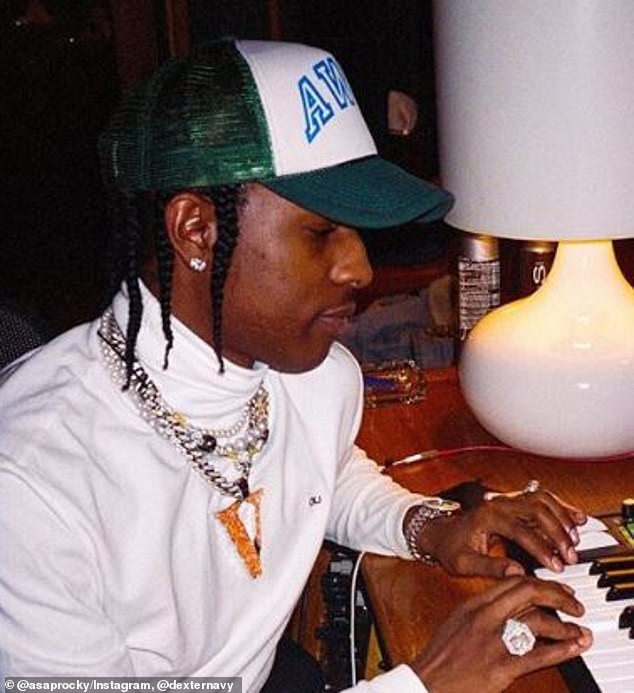 Variety: A$AP Rocky wears them quite a lot, bringing them out for events and Instagram photos 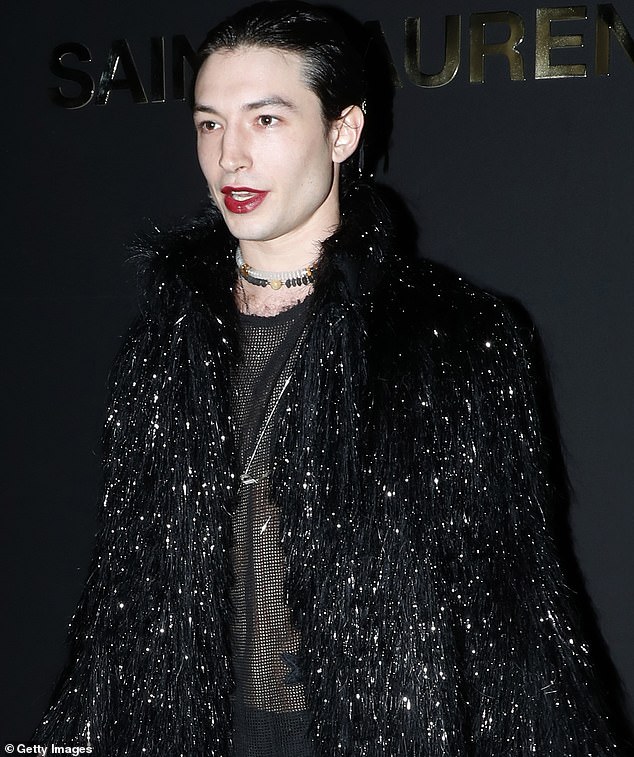 Fun: Ezra Miller is another star who plays with fashion, and he too has worn pearls on the red carpet (pictured here in February 2010)

Harry Styles is certainly one of the most frequent pearl-wearers, adding them to T-shirts, cardigans, and sweaters.

Harry told The Guardian last year that he just wears what he likes, regardless of it was designed with a certain gender in mind.

‘What women wear. What men wear. For me it’s not a question of that. If I see a nice shirt and get told, “But it’s for ladies.” I think: ‘Okaaaay? Doesn’t make me want to wear it less though.” I think the moment you feel more comfortable with yourself, it all becomes a lot easier,’ he said.

But there are also pearl necklace wearers who aren’t what one might expect — namely, hip hop stars.

A$AP Rocky has worn quite a few different pearl necklaces, picking them out for public appearances and Instagram posts.

Rapper Gucci Mane has worn them too, layering them with chains and diamonds. 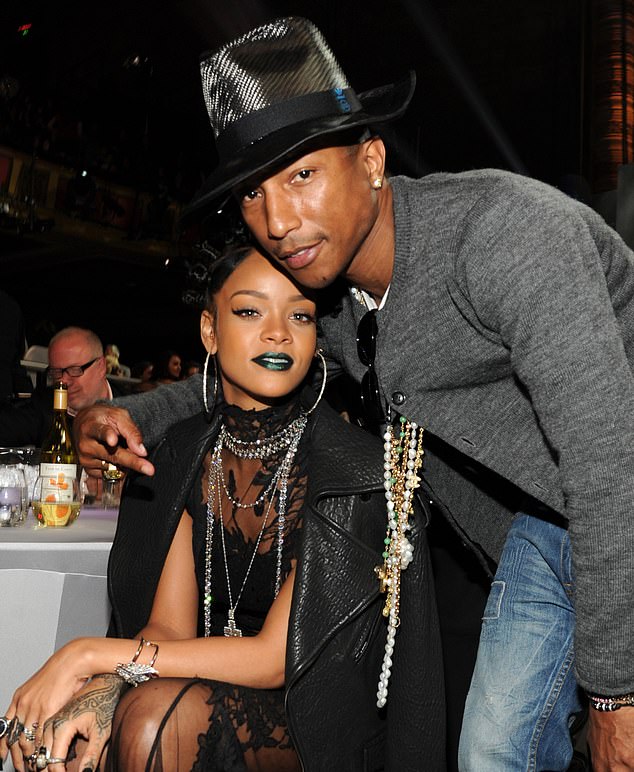 Flashback: While Pharell’s Chanel moment in 2016 made headlines, he’d actually worn pearls before — including at the iHeartRadio Music Awards in May 2014 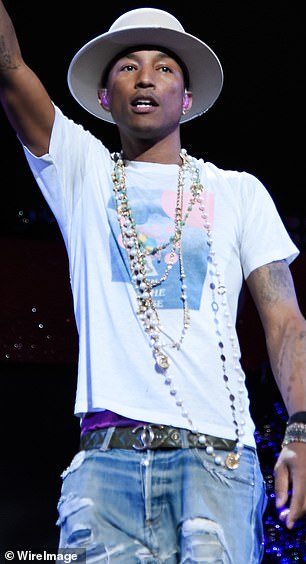 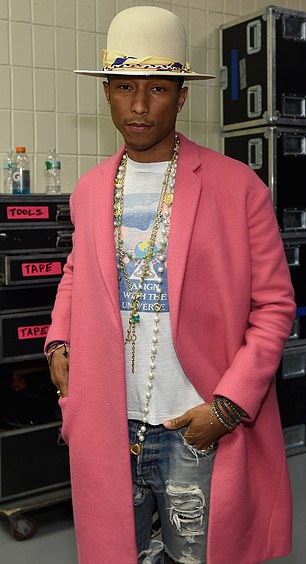 The king: he wore a particular layered necklace look multiple times in 2014 (pictured on the same day in December) 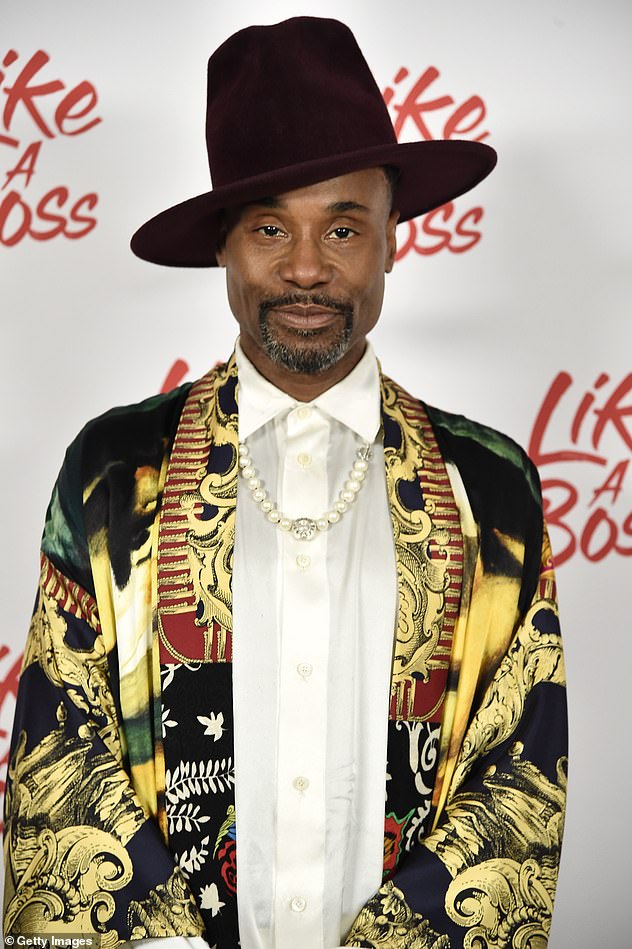 Accessories are everything: Pose star Billy Porter is known for his gender-bending style, and made a statement with his Mckenzie Liautaud Jewelry necklace on December 14, 2019 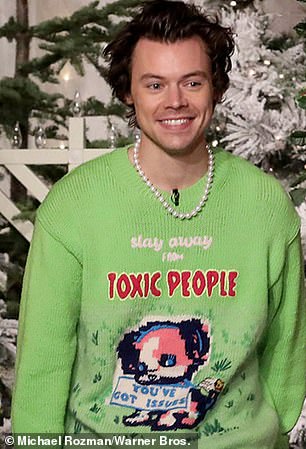 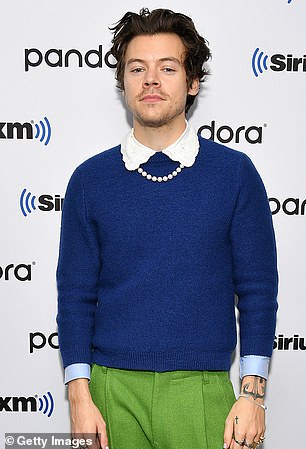 Wearing ’em with confidence! Harry Styles pairs them with just about everything 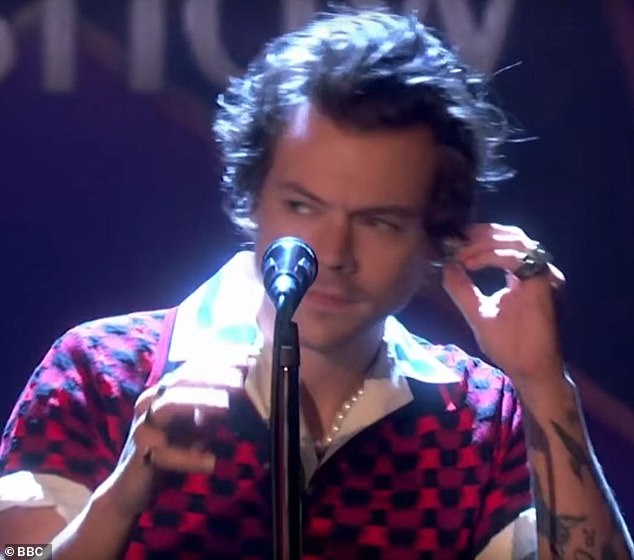 Whatever he wants! He has spoken out about not caring what gender a garment or accessory might have been made for 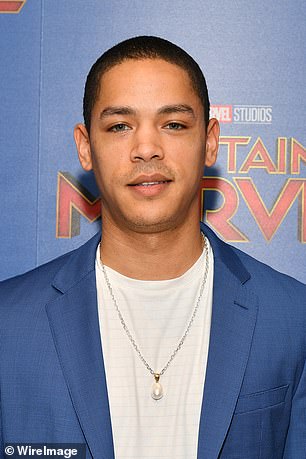 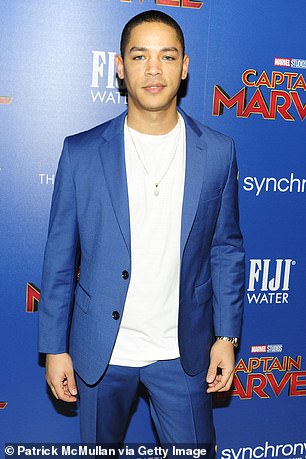 A piece of flash: Empire star Jeremy L. Carver attended the ‘Captain Marvel’ screening in March wearing a single pearl on a chain

Certainly, each of these men is looking to make a statement.

‘If you were to put a gold chain around your neck, no one would be talking about you, because it’s been done a thousand times,’ Mark-Evan Blackman, assistant professor of fashion design and menswear specialist at the Fashion Institute of Technology, told the Wall Street Journal.

Men are also just wearing more jewelry in general, which one expert attributes to social media.

These days, men ‘don’t look at fashion magazines, but they look at Instagram,’ Cynthia Sakai, a Japanese jeweler, told the New York Times in 2018.

‘Guys do style posts on Instagram, they do selfies and tell their friends what they’re wearing. Instagram and Snapchat changed the game.’

END_OF_DOCUMENT_TOKEN_TO_BE_REPLACED

Momento Pearl – Save Your Precious Moments In A Pearl – NFC Jewelry

END_OF_DOCUMENT_TOKEN_TO_BE_REPLACED

Paper mache, the quarantine craft of choice for designers and artists